The newborn sleep deprivation is real. But we are almost out of the newborn stage as Everly just turned three months old.

The first week after her birth, I was on my own with her every night. We were staying at my sister’s house so I was in my sister’s room with the baby, Danny was in the basement with the toddler, and my sister was sleeping in my nephews’ room. We made it work. At the time, I didn’t realize how sleep deprived I was as I went through the motions of waking up every two hours to breastfeed. Everly would be wide awake at night as she hadn’t adjusted to understanding day versus night. After rocking her and singing to her for 15 minutes, I would look down and see her big eyes were wide open. It was exhausting!

On November 17, 2019, we officially moved into our new house. Danny started helping me with the baby with one bottle feed each night, which allowed me more sleep!

We are looking forward to all the memories we will make here as both girls grow.

On November 5, 2019, we welcomed our sweet second daughter to this world. Everly was born at 1:50pm, weighing 7lbs 3oz. and measuring 19 inches long. We gave birth at Sky Ridge Medical Center in Denver and overall had a good experience there.

Everly came 10 days early. My contractions began around 3am the morning she was born. At the time, we were living with my sister and parents while we waited to move into our new house. I labored at home and at 7am, I woke up Danny and said “it was time to go.” He literally said, “Go where?” Oh husbands… Don’t you love how they can be so clueless?

My mom helped stay with Cadence and took her to daycare that day. Luckily we were all living together so we had childcare.

When we arrived at the hospital, I was 5cm dilated; and by 6cm dilated, I received an epidural… then it was time to take a nap. Unfortunately, Tuesday was the one day my OB was off work so another doctor delivered for us.

Around 1:30pm, I was 10 cm dilated and it was time to push but the doctor was no where to be found. The contractions were coming and the nurse instructed me to start practicing to push. When the doctor arrived, I gave two big pushes and baby was out. It was so different than my first delivery where Cadence was posterior (face down) and essentially stuck in my pelvis. All my pushing would not move her down.

This time, Everly came so fast that they actually told me not to push so hard to avoid tearing but alas, Everly came out with her fist in the air which caused me to have a second degree tear again. Unfortunately this hospital did not let us take any video footage, but we did buy professional photos of our little babe.

Everyone was feeling well so we were actually able to go home the next day on November 6. This also happened to be the first day we could move in to our new house so Danny spent much of the day there waiting for deliveries (couch, fridge, washing machine). We were ready to go home especially since we had our toddler as well.

My mom actually spent that first night with me in the hospital so Danny could be home with Cadence. Cadence’s first days as a big sister went well, she was constantly saying ‘baby’ and trying to give the baby blankets and toys.

The only health issue with Everly was her high levels of billirubin (the cause of jaundice). We had to go the pediatrician’s office four days in a row to get her heel pricked for blood draws. Finally the pediatrician told me to switch to formula for 24 hours and that worked! She couldn’t really explain it but she just said that the formula would reset baby’s body to drop the billirubin. It was a stressful few days but then Everly was as great as can be.

Breastfeeding was still hard in the beginning but this time I had a better idea of what I was doing. Even though Everly most likely also has tongue and lip tie, I’m able to latch her better and she transfers milk well. She is waking up every three hours to feed so not a lot of sleep going on but we are loving the newest addition to the VanDans.

6 was the first day we were able to move in.

At 15 months, Cadence started daycare. Both my nephews had started after they turned one and I saw the many positive aspects — interacting with peers, learning in a classroom environment, and gaining some independence from parents. Even still, I was anxious and a bit reluctant to have Cadence start so early.

Unfortunately, I was no longer able to keep working with her at home. She is a needy toddler, who needs constant attention (don’t they all)! So even though I was working from home, it was pretty much impossible to get anything done! We initially started her in a daycare part time for only two days a week. This daycare (which I should really write a review for) was a very low budget center. At the time, Danny and I thought this was fine. But we soon realized that everything about this place was just sad. Sad teachers who didn’t care to be there. Sad parents who couldn’t find a better daycare (that didn’t have waitlists). And most of all, a sad Cadence every time we would drop her off and pick her up. So much tears! Even for mama! I remember dropping her off one time and just weeping in my car, feeling so guilty leaving my baby at this place!

Only three weeks here, we decided to pull her out. I researched a dozen daycares and all of them had waitlists. Unexpectedly, an opportunity opened up for her to enroll at a Primrose. These are franchised daycare centers with incredible, well-researched curriculums and pediatrician-approved meal plans. The best part was that my nephew would attend this daycare as well! 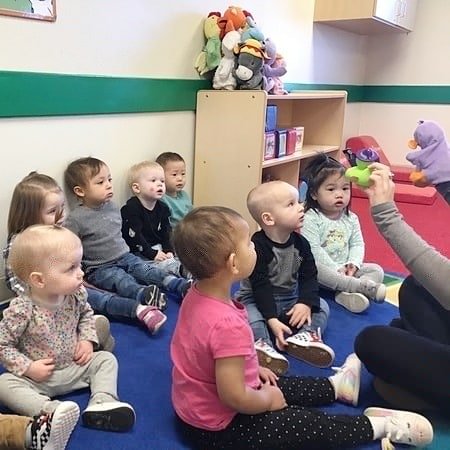 The downfall was that Primrose only offered full time schedules, so we had to make the decision to start taking her Monday-Friday, which also was significantly more expensive. The cost overall was higher and also the distance was further from our home. But… It was the best decision we could have made. The teachers here are so attentive and give so much love to Cadence. They take photos and send us updates throughout the day. And we can see Cadence genuinely learning from her experiences there — painting, reading, singing, bubbles, she loves it all. After about two weeks, no more crying at dropoffs.

And now I’m feeling much more productive as a mom who works from home (MWWFH).

Things have picked back up in Denver and quite quickly. Danny started his new optometrist position a week ago and I’ve already had tons of meetings.

We arrived on April 7, three weeks ago, and spent the first two weeks helping my sister and parents move. My sister closed on a beautiful new build home just 20 minutes from us. Cadence has enjoyed exploring all the space and playing with her cousins. My nephews seem to have adjusted very well, although they don’t play with their toys much anymore… Because they’ve all been stored in the basement where they don’t want to go.

We have experienced at least three (April) snowstorms since we’ve been back… Oh, Denver! I’m getting used to the cold weather again, but this time with a baby, which is a little more difficult having to pack more and put on several layers before baby can go anywhere.

And of course, with my own pregnant belly as we anticipate baby #2 this November.

Two years ago, we packed up our cars in Denver to set off into the San Diego sun. Friends joined us for the 3-day drive, as we hit the obligatory Instagram spots–Antelope Canyon, Moab and Las Vegas–before arriving at our new home. Well, new-old home. New for me. Old for my husband. We moved into the house where Danny spent his high school, college and ‘don’t know where my life is going’ years before optometry school. Although Danny had not lived in San Diego for the past seven years, this was where he called home.

Here, we live with Danny’s mom, brother, his girlfriend and two other roommates. While seven adults living together is certainly a ‘full house,’ it isn’t uncommon for Californians, where the housing market is brutal. Rent and mortgages eat into monthly incomes and families struggle to save.

Our first year in San Diego was whimsical. We were riding the engagement wave and planning the wedding of a lifetime. We were busy spray painting centerpieces and practicing our first dance.

Shortly after our wedding, we found out we were pregnant, which started the next chapter of San Diego life. No more wine and sushi for me. And as an act of camaraderie (and his disinterest in raw fish), none for Danny either. We continued plugging along with our jobs but decided it was best to wait on buying a home in America’s Finest City with baby on the way. We were optimistic, happy and in love.

Stay at home order isn't too bad when you get to spend it with AiYi (Auntie) @jenny.c.guo. Everly's chunkiness is coming in! 😍
Our sweet child! 💖 Asked her to think about the one thing she wishes for in the whole entire world. She wrote for the world to be safe and healthy! 😍 We are doing something right as parents! #stayhome #doingmypartco #toddlerlife #momjokes
[4 Months] Trying to get through this pandemic with our little 4 month old. Everly loves to laugh with dad until she gets the hiccups, suck on her hands, itch her face (ezcema 😣) and is starting to push up when on her belly (last pic). She enjoys her baths and sleeping in the SNOO. Not quite sitting up yet so not ready for solids. In times like this, just trying to keep our kids and our elders safe. Please be careful and well, my friends. #everlyvandan
Turned 2 today. It went well. 😂 She was actually fine the entire 'party' until it was time to sing and I told her to be careful not to touch the candles because they were hot. How could I forget she is my sensitive little munchkin? 😭😭😭 Cadence's birthday is on #internationalwomensday! Can't wait to see how she changes the world one day with her big, compassionate heart! ♥️ Happy 2nd birthday to our baby.
Daycare Picture Day is better with cousins.
Here are the faces of two sisters who have no idea how to play together... yet. One day! 😂😍